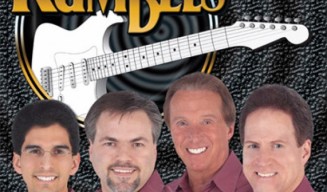 The Rumbles have been one of the most popular and successful rock-and-roll dance bands in the Midwest for almost 50 years.

You’d think a band with such a storied history would be content to rest on its laurels and drive off into the setting sun of semi-retirement. Not a chance. There’s still more crowds to be rocked and their busy schedule proves it.

Originally an early-1960’s high school “garage band” from Council Bluffs, IA, the Rumbles began playing professionally in 1963 with the original permanent lineup of Rich Clayton and Joe Brunnworth on guitars, Warren “Bud” Phillips on bass guitar and Steve Hough (pronounced “Huff”) on drums. Although he was the last to join as well as the youngest member, Hough is the only remaining “original Rumble” today.

When the Eddy Haddad Entertainment Agency of Omaha assumed management of the group in 1964, the band’s popularity took off. The somewhat strange marriage of the big band leader Haddad and the raucous rock-and-roll band with the soaring vocal harmonies paid off handsomely throughout the 1960’s with several hit songs and huge crowds throughout the Midwest.

1968 brought the monster single "Jezebel", which went to #1 in several Midwestern radio markets and charted on the Billboard Hot 100. A string of chart singles followed, including “Everybody’s Talkin”, “14 Years”, “Out of Harmony”, “Hey Lenora”, “Push, Push” and others. Even the loss of band founder Clayton, who moved to California in 1967 with the band on the verge of stardom (replaced by keyboardist/guitarist Bob Ford), failed to slow down this musical juggernaut.

But the one thing that did bring the Rumbles popularity to a halt was something they had little control over – the musical tastes of their core audience. As psychedelic music started to win over young people in the late 60’s and early 70’s, the Rumbles witnessed an unprecedented phenomenon – kids sat down to listen to the music rather than bolting for the dance floor. Consequently, attendance at dances rapidly declined and The Rumbles were soon forced to disband.

The Rumbles went their separate ways in the ensuing years: Brunnworth followed Clayton to California, Phillips became an electrician while playing in other bands, Ford continued in an “unofficial” Rumbles combo before starting his own group, while Hough got into the nightclub business and formed his own band “Horse” as well, a horn outfit that featured wife Fran as one of the lead vocalists.

In 1979, the original Rumbles were asked to do a reunion concert at Omaha's Peony Park. It would be the first time the band played together in over eight years. Omahan Lance Hancock, who missed out on a Rumbles berth in the late 60’s when Brunnworth was booted from military service, was now the lead guitarist with Brunnworth’s departure. Figuring it was a one-shot performance and his “15 minutes of fame”, Hancock never dreamed he would go on to play 19 years with the band, 2nd only to Hough’s tenure.

The “Rumbles Reunion” dance was such a huge success that the group decided to reform later that year. Phillips and Ford signed on for another tour and with Haddad resuming management of the band, the Rumbles picked up where they left off in the early 70’s and never looked back.

Haddad remained with the band until his retirement in 1986, handing over management and booking duties to drummer Hough. The band never missed a beat (forgive the pun) and despite a handful of personnel changes through the years, remains what it is today: the best rock-and-roll dance band around!

The Rumbles still continue to draw crowds of rock and roll fans far and wide and have done more street dances than any other band in the area during their long, successful career.

As they always like to say,”We started this band to have some fun, and we aren’t giving up until we have some!”