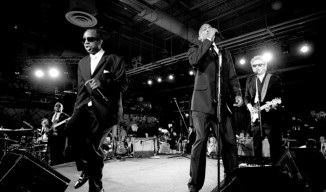 The Confidentials have become one of the Midwest’s premier party hosts with their unique blend of funk, jazz, and reggae. The power ten piece act fronted by the Spurgeon brothers Stan and Steve are known for their funky, soulful good-natured and spirited live performances. The band has released 5 CDs and plays over 100 dates a year throughout the country.

The group's sound and presence is at its peak, regularly packing some of the Midwest's premium musical venues, with standing-room only crowds. A profusion of performances throughout the Midwest, and a surge of recent shows on the West Coast, has the band in top touring shape. In addition, The Confidentials have established themselves as one of the region’s most popular party bands, lending their musical style to many private and corporate events. The band has recently been featured in the January 2006 issue of Modern Bride as one of the 150 Hottest Bands across the nation!

Many of the band's original songs have become anthems for fans, with local radio stations using these songs as backdrops for their radio programs and commercials. The band has 6 CDs of original music to their credit, including a the first ever new cover CD “Under the Covers” that was released at the end of March 2006. In 2003, The Confidentials had two songs signed by music publisher Justin Wilde of Song Castle Music in Lakewood, California. 'Mama's Song' and 'Angel' both reflect the unique vocals and sound styling’s that are The Confidential trademark. And recently, three of The Confidentials CDs have become available on iTunes and have been increasingly popular in the music download community.

As the band's popularity continues to grow, so does the broad appeal of their musical message. Their ever-expanding flock of fans will testify: "Harmony is not just a musical concept - it's a personal goal."