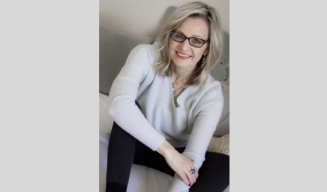 "She hails from Nebraska - but she swings like a big city girl!" That's what critics are saying about Susie Thorne!

Born in Hastings, Nebraska, the daughter of a classically trained vocalist mother and a professional trumpet player father (who was an occasional sideman for such greats as Lionel Hampton and Gerry Mulligan), Thorne was raised with a great love of music.

Susie shared a love of jazz with her father and still has all their old albums. As a young girl, Susie's favorite was Herb Albert and the Tijuana Brass! Susie was also fascinated with the vocal recordings and would sit for hours, playing them over and over again until she had mastered their exact phrasing and rhythmic interpretations. Her late father also owned and operated a jazz club in Omaha, Nebraska after his retirement. The club featured a popular Friday night jazz-jam which was recently featured on a PBS Special "Next Exit" for its long-running jam which is still occurring today. There, Susie was able to sit in as a young girl and try her hand at the standards.

Music was a big part of Susie's life in high school where she sang in all the choirs and accompanied the swing and jazz choirs on piano. Susie also studied classical voice privately with Julie Knowles, a choral composer and educator. After graduating from high school, Thorne traveled the United States as lead vocalist in a Rhythm and Blues band. Wanting to broaden her horizons, Thorne also traveled overseas where she entertained fans as a solo piano/vocalist on tour through Europe and Asia.

After returning to the states, Thorne re-connected with her jazz roots while studying piano performance at the University of Colorado at Denver. Once there she was re-introduced to vocal jazz and inspired by such legendary artists as Ella Fitzgerald, Nancy Wilson and Carmen McRae and went on to study vocal performance at the Academy of Vocal Arts. Thorne was invited back on tour and went on to perform for a loyal following in Japan and Hong Kong. There she continued her jazz studies with American jazz artists on tour.

Visiting her family in the US, she met her husband and settled in Omaha, Nebraska. Here she continues her musical studies at the University of Nebraska at Omaha where she studied classical voice with Wendy Eaton and has performed as a vocalist with the UNO Jazz Band. She has also studied vocal jazz techniques privately with Jennifer Shelton-Barnes and jazz-piano with Christine Hitt. Her first CD, "Love for Sale" was released in 2000 and greeted with critical acclaim, winning her comparisons to the vocal stylings of the legendary performers such as a young Eartha Kitt.