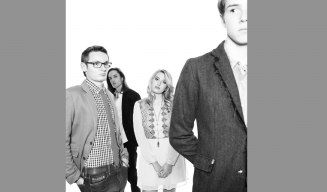 Clark & Company was created by triplet siblings from Omaha, Neb., with Sophie Clark on keyboard and vocals, Cooper Clark on acoustic and electric bass, and Simon Clark on drums and percussion. Sophie is also the songwriter for the group. Company members are Cameron Thelander on tenor saxophone, Michael Palandri on alto saxophone, and Sam Tarin on trumpet.

Clark & Company is an Indie R&B band with mature melodies, fresh arrangements and a stirring signature style. The band’s first album, “Three of Swords,” with 13 original songs, was released in January 2014. One of the songs from this album, “Battle Cry,” was named a finalist in the 10th Annual International Acoustic Music Awards, in the Best Group/ Duo category.

Clark & Company’s second album—“Larger World”— was released in November 2014. Larger World takes listeners on a lyrical journey with 12 original songs that incorporate a host of acoustic sounds and styles—including rhythm & blues, jazz, soul, rock and singer/songwriter. One of the songs from the second album, “To Rule the World,” was named a finalist in the 11th Annual International Acoustic Music Awards, in Open Acoustic Category.

Clark & Company was a 2015 nominee in the Omaha Entertainment & Arts Awards, R&B/Soul category.

All six Clark & Company members are students at the University of Nebraska at Omaha.