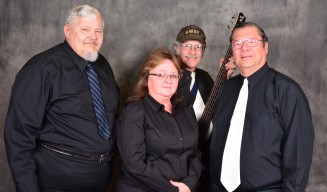 BluesAgent was born out of a situation that many bands unfortunately experience. Uncle Joe Boarman was part of an Irish band that got hired to play for a St. Patrick’s Day party at an Omaha area bar. Well, the crowd wanted rock and roll dance music and showed its displeasure. It got ugly. One member of the band quit after that gig and the rest of the band was discouraged.

Uncle Joe contacted Torri Pantaleon, a drummer with whom he worked in a novelty band for several years. Uncle Joe asked if Torri wanted to start a dance rock band. Never turning down an opportunity or challenge, Torri signed up.

They found another local musician to play lead and began to rehearse. Originally called “The G-Men,” they settled on BluesAgent after they found out how many bands were called “The G-Men.” Although getting several gigs after one year as a band, they couldn’t seem to keep a bass player. Finally, Uncle Joe ran across Bob Roose. Bob came on board and things really started to change for the better. Bob not only added competent bass playing, his singing gave the band four strong voices.

Things still didn’t feel quite right and for good reason. The lead player notified the band that the next gig would be his last with BluesAgent. Torri held a meeting with Uncle Joe and Bob saying that the band should stay together and that all three be very proactive in finding a new lead player.

Bob brought in Mark Nelson, a well-known Omaha musician. What a stroke of fortune! Amazingly, Mark and Uncle Joe knew each other. After the first rehearsal with Mark, the chemistry was sealed. BluesAgent now has all the right pieces in place.

Mark and Bob can both play several instruments, while Uncle Joe is proficient as a rhythm guitarist on the six and 12-string guitar. All four sing, giving the band a strong vocal element. Uncle Joe, Bob and Torri mix and match as backup vocalists with strong harmonies.

All of the guys have been playing in the Omaha area for years and they all bring varied playing experience and music tastes into BluesAgent giving it a strength and ability to interpret songs that many other bands don’t have.

The band’s philosophy is to have fun, make people happy and get them to dance. If they don’t dance, at least have them tapping their toes and singing along. BluesAgent plays rock and blues dance songs. Whether the song is fast or slow, you can bet that you can dance to it.

A veteran TV sportscaster and play-by-play announcer, Torri’s outgoing personality allows him to be the band’s spokesman during gigs. His ability to interact with a crowd has been invaluable. Uncle Joe has many years as a solo acoustic musician/singer and has helped him hone his stage presence. Uncle Joe is also excellent at playing to a crowd.